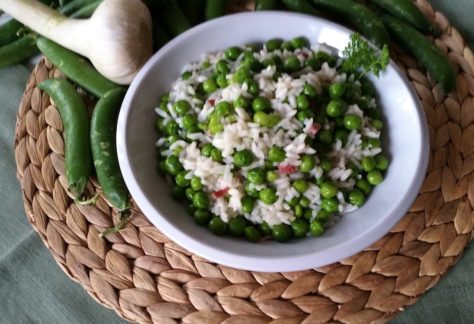 Their cultivation has been introduced on a large scale by the Indo-European peoples who imported them from Asia.

The Romans and Greeks exported them to every corner of the Mediterranean and Europe.

The scientific name of the pea is Pisum sativum, this legume belongs to the Papilionaceae family. Its roots do not go deep, but the stem can grow up to two meters. Its fruiti s a pod, a kind of practical case which contains round seeds which are more or less smooth according to the species. It is the pod that allows you to understand if the peas are fresh. When the peas are freshly picked, the pods can be eaten: they can be cooked in some soups or put in delicious salads when the pods are particularly tender.

Venice has a peculiar series of celebrations and local festivals and among them also the holiday on April 25. This is the “Liberation” holiday and is celebrated throughout Italy but for Venice this festival and that of St. Mark, the patron saint, overlap. So the Venetians also celebrate The Feast of the “boccolo” or The feast of the Lovers, during which it is a tradition for the young lovers to donate a red rosebud to their beloved, and The feast of the freshness of the garden harvests,  during which, for long time, in fact many centuries, the Doge of this wonderful Republic has had the privilege of eating first the peas of the new harvest, on this day dedicated to St. Mark.

In the Public Records Office of the Frari the “sheets” regarding  the state banquets report that on April 25, 13 dishes of rice and 13 of peas were provided.

These are the ingredients, it is not clear if they were consumed separately or if each diner mixed them together in his plate.

Also the amont is a legend: that day the dish was very rich and had a pea for every grain of rice.

At the time as now, the green, fresh and sweet peas have been picked in the gardens of the lagoon-islands of Saint Erasmus, Le Vignole, Mazzorbo, Torcello etc…exceptional sources of tender and flavorful vegetables, which are provided with salt by an amphibious life. The high water, which covers the land several times during the year, leaves behind an unique salty taste.

Even if with many variations, the dish “rice and peas” is still common throughout  the Veneto region and not only, in fact it is used in most of the eastern countries of the Mediterranean Sea: in Dalmatia and on the Greek islands, which were part of the Venetian Republic, but also in the mainland of Greece, Turkey and Lebanon.