The asparagus is a perennial plant of the Lily family, which lives underground,  and in the spring produces sprouts of delicate flavor and white color, if grown covered with sand, or green, if grown exposed to the light. These sprouts are the edible part.

This plant comes probably from Mesopotamia. In its wild form, it was already known to the Egyptians (4000 BC), who spread their cultivation in the Mediterranean. The Romans, with their refined palate, developed the cultivation in our area.

Its name apparently derives from the Persian “sperega” which means “sprout”; transformed by the Greeks into “asparagos” which means “full of sap”.

Our country, after the United States and France, is one of the largest producers of asparagus and Veneto is one of the most interesting regions, both qualitatively and quantitatively, for the cultivation of this vegetable.

Obviously, the asparagus is a valuable crop with its high cost, also because often only the tip, the most tasty and pleasant part, is consumed. More rarely the stem is used to prepare, for example, a cream to enrich risotto or  sup.

Of course, the best way to taste the asparagus is freshly picked, raw, dressed with a vinaigrette.

If you prefer a cooked version, steaming is the best way for preserving the vitamins and minerals, but the asparagus can also be cooked in salted water to a moderate boil, straight in a confined space, preferably in a pot suited with a basket, which facilitates the extraction of the asparagus without damaging them. 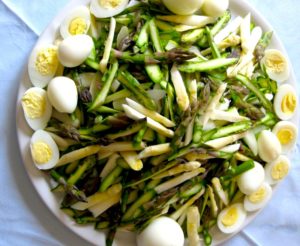